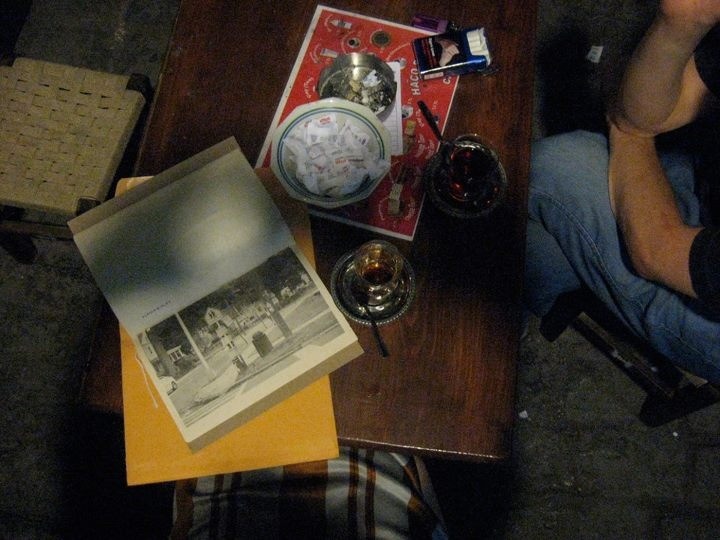 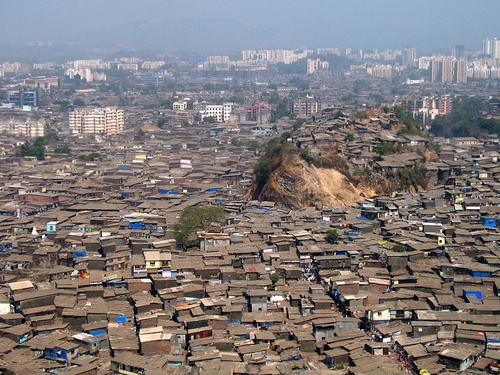 When Tsubasa came by my show at NURTUREart, I couldn’t resist asking him to take some photos. Here are a few gems he left on my camera that day. 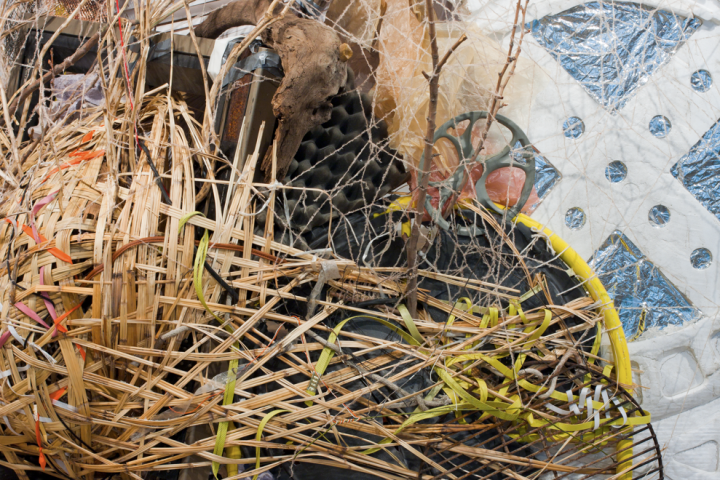 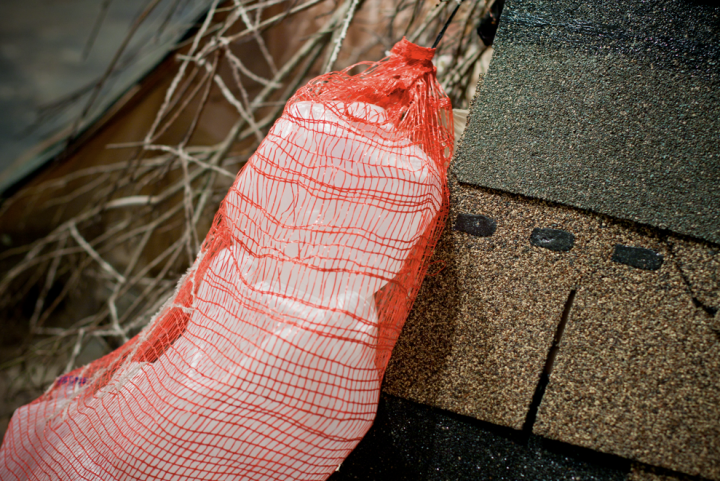 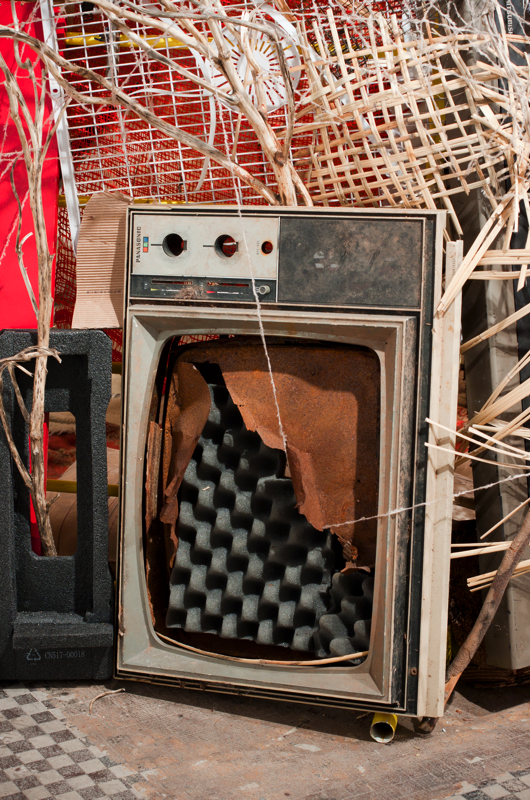 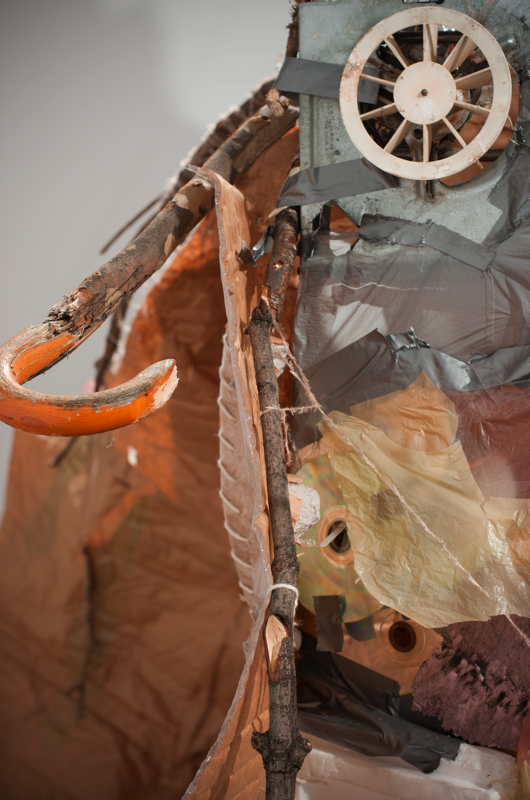 I organized these workshops at NURTUREart last month. See more photos at RepairedThings.com! 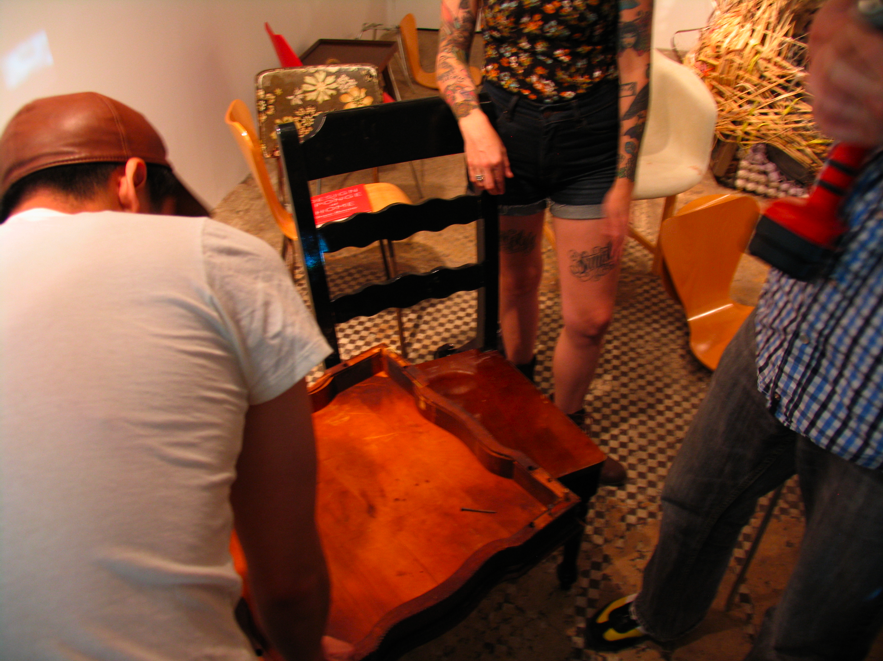 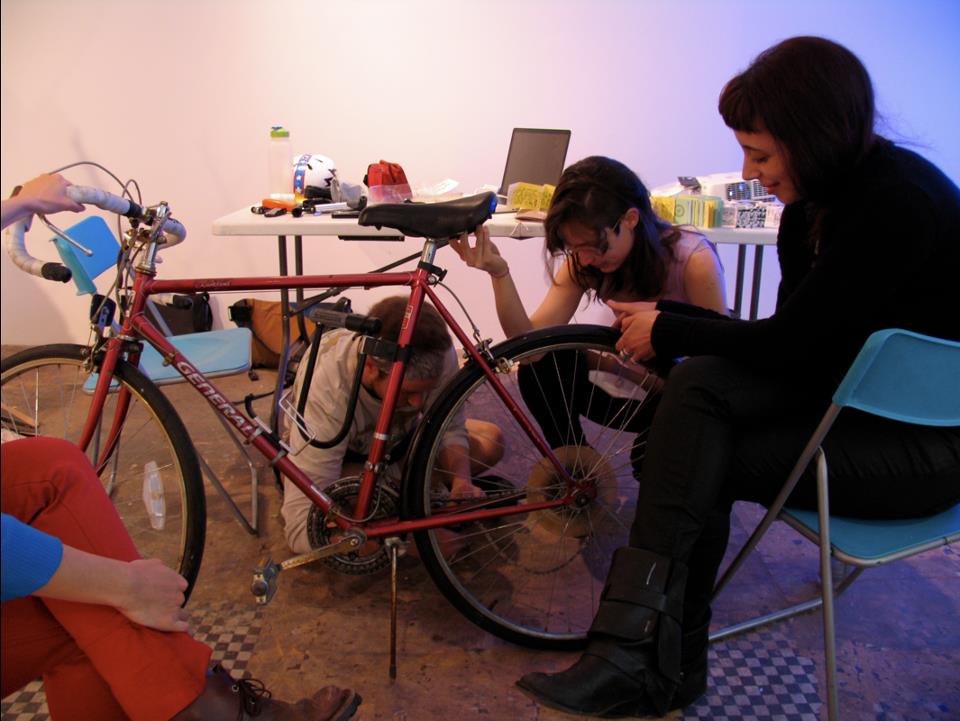 I shot this video clip in Bangalore. These ladies are weaving floor mats on the side of the road. I love the rhythm of it.

I also apparently loved the combination of bits of rubble and string; Seeing this surely lead to Walking Sutra.

It’s also the technique I used to weave cardboard strips into blinds for the sculpture Make Shift. I reused the blinds in The Life Instinct.

Two pieces of press this week for The Life Instinct:

Art As Instinct: In Conversation With Anne Percoco — An interview with Vanessa Saraceno

In her latest project Life Instinct, currently on view at Nurture Art, Anne Percoco created a makeshift shelter, combining creative resourcefulness with the playful improvisation of a child’s fort. This hut is made with materials — both synthetic and natural — Percoco found on the streets of New York. In this project, the hut and all of its joyful grace act as the visualization of a positive creativity that favors resourcefulness and self-sufficiency. Celebrating at the same time makeshift solutions with a survival instinct, this exhibition draws attention to a re-consideration of the values and functions for every object. In saving all these objects once categorized as refuse and bringing them to a new life, repairing becomes a creative act.”

Jersey City Artist Sees Jersey City From the Outside by Matt Hunger focuses on my relationship to Jersey City, and to my surroundings in general.

The Life Instinct, at Brooklyn’s NUTUREart gallery. The show, which opened in late April and will run until May 29th, is a solo exhibit of work that, in the words of the studio, celebrates “makeshift solutions, survival instincts, and the reuse of discarded material.”  This apt description, while applicable to the entirety of her show, resonates strongest with Percoco’s largest sculpture on display: a hut consisting of the empty frame of an old television set, venetian blinds as part of a roof, twigs and twine, ropes and styrofoam, and that can be entered and sat in. It is too pertinent not to refer back to Koolhaas when he writes, “the built… product of modernization is not modern architecture but Junkspace.”

Ji Yoon created a folding painting in the hut of The Life Instinct as part of her project 100 Folding Paintings. I love the details she captured in this video, and I love how she activates the space with the tape, plastic, and her body.

This body of work came from the experience of moving herself and her artwork from New York to Seoul. It’s also inspired by the process of moving Jay DeFeo’sThe Rose.

In the summer of 2011, as I was preparing to move back to Seoul from New York, I saw a book about Jay Defoe’s work. I was not very interested in the content of her painting, but I was fascinated by the process of transportation when her work ‘The Rose’ had to be moved from her room, where it took her 8 years make, to a museum. The work measures 11-by-8-foot and weighs one-ton behemoth. About a dozen handlers had hold it at the same time and they had to cut the exterior wall of the house with industrial machines. The absurdity of moving an oversized painting was almost humorous, the canvas, paint, and frame shouldn’t be ruined, so they would rather destroy a part of architecture. The paintings that are square, heavy and large still holds inheritance from the history of European painting. However, I questioned this form of painting, not able to become adaptive to situations, can be valid artistic medium to reflect today’s fast-paced environment where new, fluid, lighter and attractive mediums are created? Paintings can hold more than the formative language such as line, color and composition. I want to make a different kind of paintings that reflect the relationship between myself and the society, a kind of painting that interact and change in flexible form.

‘Folding Paintings’ project is an approach to my practical problem through the process of working with painting.The project is in response to physical and economic constraints I can’t overcome right now.  There are instances of having to move canvas that I can’t carry by myself, to buy large amount of material or to rent a studio with large walls for oversized canvas painting. In Folding Paintings, I took ripped a painting out of canvas, which couldn’t be exhibition and was bound to a storage. Once the painting was free from the stretcher, it became easy to fold and go anywhere. Some of them have travelled internationally: from South Korea to Canada, Norway, Germany and the United States. When my friends volunteered travel the folding, they fold it in their own way and send me the documentation of the process and the final shape. The material form of painting becomes marginal, while the relationship between myself and others keep producing new value.

‘189 Franklin St’ is a new project, growing out of the Folding Painting, I visit other artist’s studio, office, school, and public space and work in that place together for few hours. So the project could be realized with permission from the space owner. The hours of visits is the time of ‘painting in the making’, the time to meet with unfamiliar objects. Whereas traditional studio practice isolates artist in the working process, I want to make work by relating to my immediate community and society at large through painting.

This is the debris left from my installation of The Life Instinct. People kept mistaking it for a sculpture! So when Marco suggested I go with it, it made perfect sense. After its transition from non-art to art status, people kept mistaking the it for trash, and a few people tried to clean it up. Love that ambiguity. 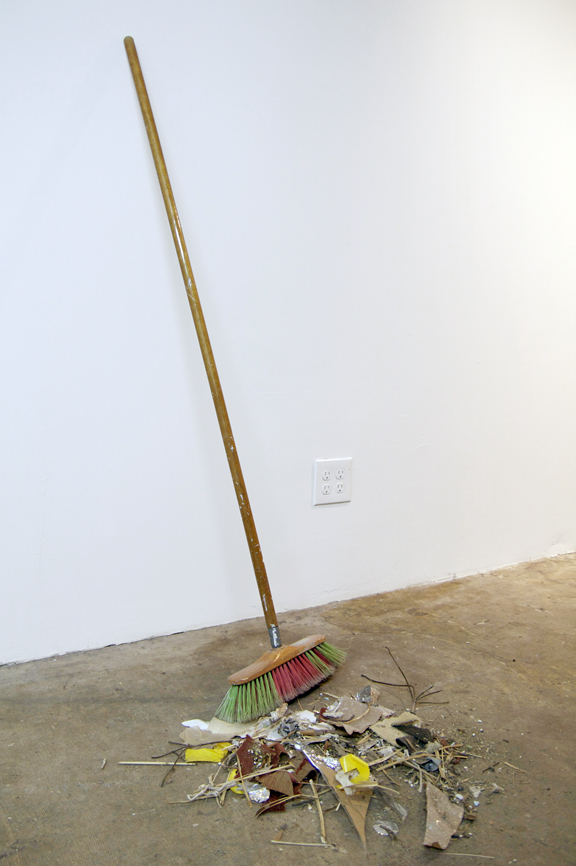 It also reminds me of this passage by Rebecca Solnit, from her essay Dirt. She discusses a letter-to-the-editor in her local paper addressing a bronze sculpture:

The letter pointed out that the ratio of disturbed earth to extracted copper is 364 to 1 and that therefore, somewhere out of sight, a considerable pile of tailings exists in conjunction with the sculpture. I am fascinated by this way of looking; by the implication that the meaning of the visible sculpture should incorporate that unseen heap…” 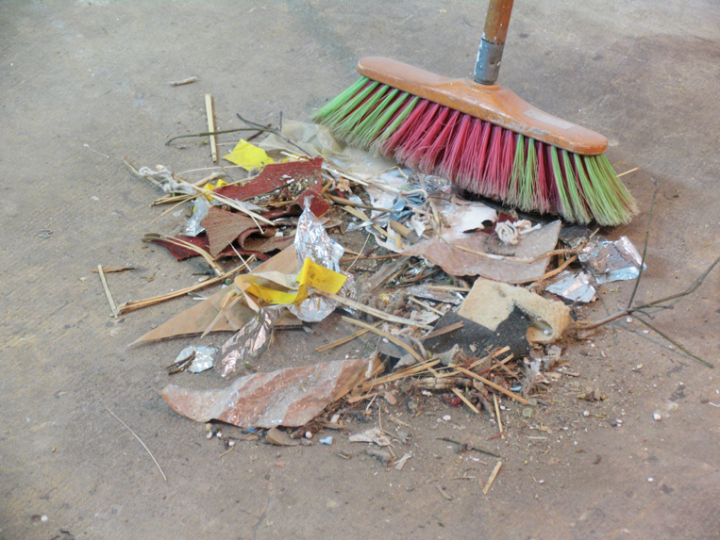 It is really hard for me to mentally separate an art object, the process of its making, and its by-products.

Head nod to ILSSA’s recent show at Saint Mary’s College. They asked their members to save the waste products of their art practice for a whole year, and then displayed that material:

In Dire Dawa, Ethiopia, residents of this shantytown sided their houses with flattened food-aid tins.
via Future Perfect.

I’ve been collecting bits of string and rope to weave into the hut. Just picking it up off the street. 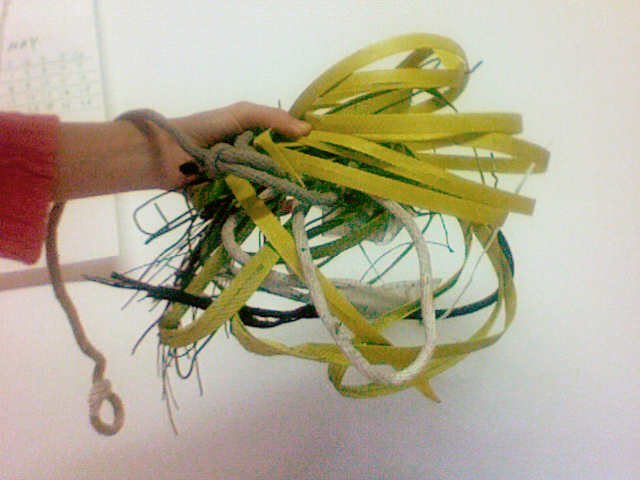 This fuzzy thread (from MFTA) is going to play an important role too. 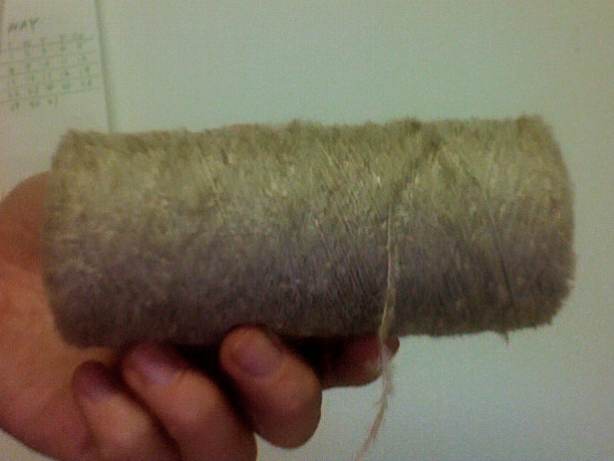 Anne Percoco
Create a free website or blog at WordPress.com.