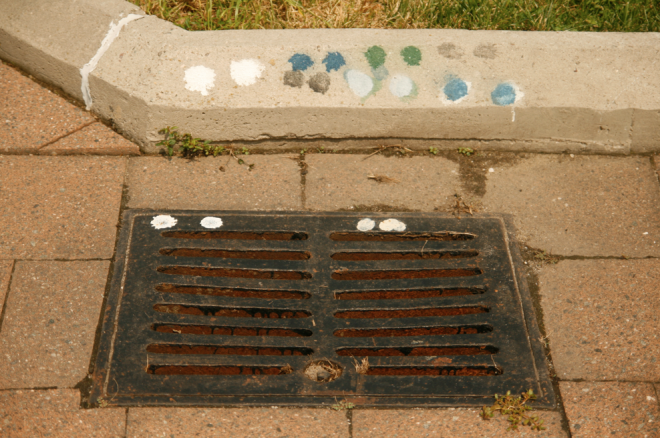 … what these pairs of spray-painted dots are for:

But the people out in the field dealing with the pipiens [a mosquito] problem are not city workers but exterminators—in particular, the men and women at Kingsway Exterminating. Motto: “We kill with skill.” They are a family business, operated by Richard Kourbage, who responded to a call for bids from the city after the West Nile outbreaks.

Kourbage and his men visit each catch basin in the city, over 200,000 of them. In crews of two dozen men, they visit each about four times. They use bikes to speed the trip—folding bikes that can fit in cars or be taken on subways. At first, the men were mistaken for terrorists and reported to police. Now the police are aware of them. So they don’t repeat treatment of a single catch basin, they leave a colored dot on the basin when they’re finished; the history of the city’s war with pipiens is written on our curbs. “We’re not allowed to use red or orange,” says Kourbage. “We’re limited by the city to certain colors. Black we did once. Silver we’ve used.”